GST is a game-changing development for the Indian Economy as it brings standardization in the taxation arrangement. It is a consumption-based indirect tax charged on sale, manufacturing, and consumption of goods and services. 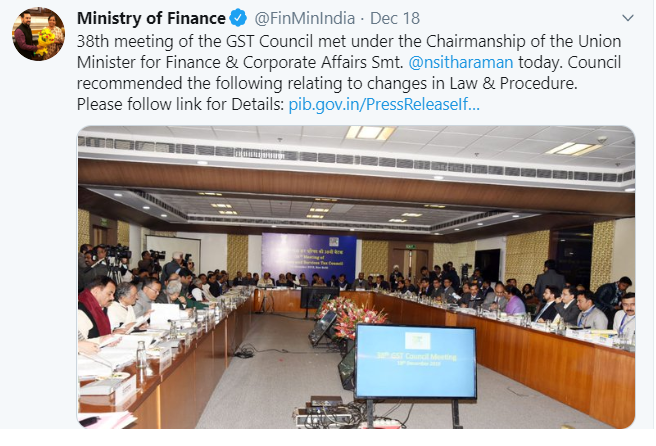 Recently, the GST Council conducted its 38th meeting on 18th December 2019 in New Delhi. It was chaired by our Hon’ble Union Finance Minister Ms. Nirmala Sitharaman. The meeting has been concluded with several noteworthy changes in the prevailing GST rates, provisions of Input Tax Credit, etc. Further, the council has also made the announcement relating to the formation of Grievance Redressal Committees, Late fee waiver on GSTR-1.

GST Council conducted its 37th meeting on 20th September 2019 at Goa. It was chaired by our Hon’ble Union Finance Minister Ms. Nirmala Sitharaman. Several decisions were taken at the meeting, which comprises of new GST exemptions, rate revisions, relaxations in annual return filing, etc. The main aim behind several announcements was that it would hopefully lift the economy which at the moment seems to be in shambles.

Through this meeting GST Council announced

· The New GST returns system has been delayed until April 2020 so that the taxpayers can make a fresh start from the new financial years.

· The GST council in its meeting has decided to put restrictions on ITC claims in GSTR-3B to push the taxpayers toward timely filings of a statement of outward supplies.

The GST Council in its 37th Meeting, which was conducted on 20.09.2019 in Goa, came up with several considerable changes, which comprises of new GST exemptions, rate revisions, relaxations in annual return filing, etc. These changes were predictable to upgrade the condition of our economy, which presently seems to be in the middle of turmoil.

Further, the 38th GST Council Meeting happened on 18.12.2019 at New Delhi, also happened during the time when there is an immense pressure on the council to boost up revenues amidst a deficit. However, the council at this meeting decided not to alter any GST rates, as the increasing GST rates and removal of exemptions may lead to inflation and induce people to spend less.

Moreover, for the first time in the record of 38 meetings, the GST council decided to go away from its regular consent-based decision making and instead opted for voting to decide the GST rates on the lotteries run and authorized by the state government. What is a Multi-cut up aircon gadget? Benefits of Outsourcing your DME Prior Authorization Services